Pedalpalooza ride traces the route of the first train to St. Johns 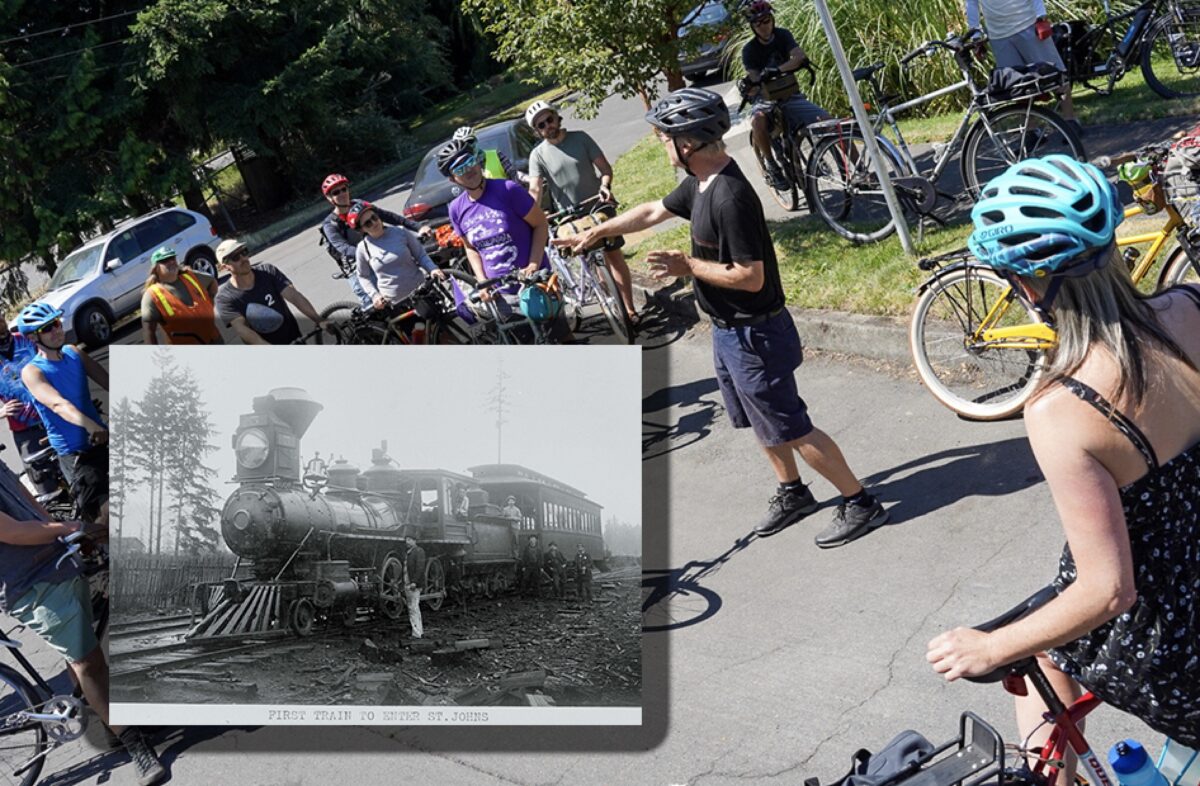 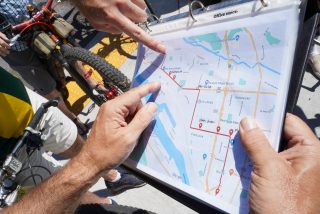 Nerdy educational rides are the unsung heroes of Pedalpalooza, Portland’s three-month free bike ride festival that runs through the end of August. They don’t get as much attention as the busy (and fun!) Rides; but those who seek them are often rewarded with anecdotal-laden ideas and tidbits that add depth and meaning to the places we pass through.

Sunday’s Train History Ride was a prime example. Led by two renowned Portland authors and historians – Shawn Granton and Dan Haneckow – the ride retraced the route of the St. Johns Motor Line, a steam train that was the first mass transit to service the peninsula. Launched in 1889 and in service until 1903 (after which it was electrified), this train carried passengers from the lower Albina district to St. Johns via Commercial, Killingsworth, Greeley, Lombard and Fessenden streets. Along the way, this had a major impact on how North Portland developed in the early part of the 20th century. 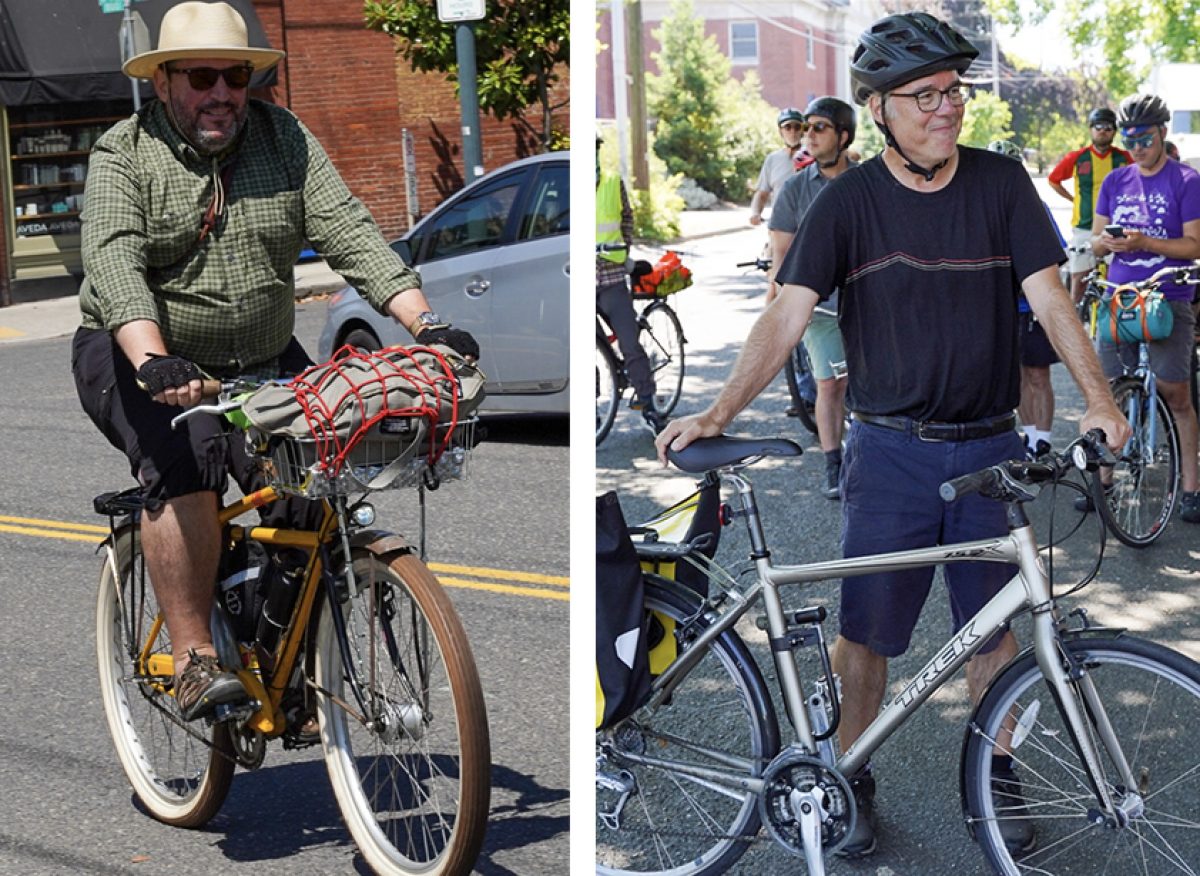 The ride was curated by Granton, a renowned illustrator, founder of the Urban Adventure League and author of the incomparable Zinester’s Guide to Portland. The ride itself was led by Haneckow, who you may know from his excellent Cafe Unknown blog or book, Portland yesterday and today.

Haneckow has been fascinated by urban history since he was a child in a Navy family that moved across the United States. On Sunday’s drive, he explained to me that it was Portland’s rich streetcar history that first drew him to the topic locally.

The St. Johns Motor Line caught Haneckow’s attention because it was a forerunner of electric streetcars and traveled through relatively undeveloped land north of the bustling downtown and mid-east districts. It was the first mass transit line to provide workers in North Portland’s neighborhoods with a way to access jobs at Albina rail yards and grain ports along the downtown shores. It began operating just over a decade after residents of Albina, Portland and East Portland voted to merge into one city in 1891. Albina was by far the smallest (in terms of population) of the three old cities, but its large geographic footprint has made speculators and city leaders salivate with the promise of new housing and urban developments – and more taxpayers to fund growth. 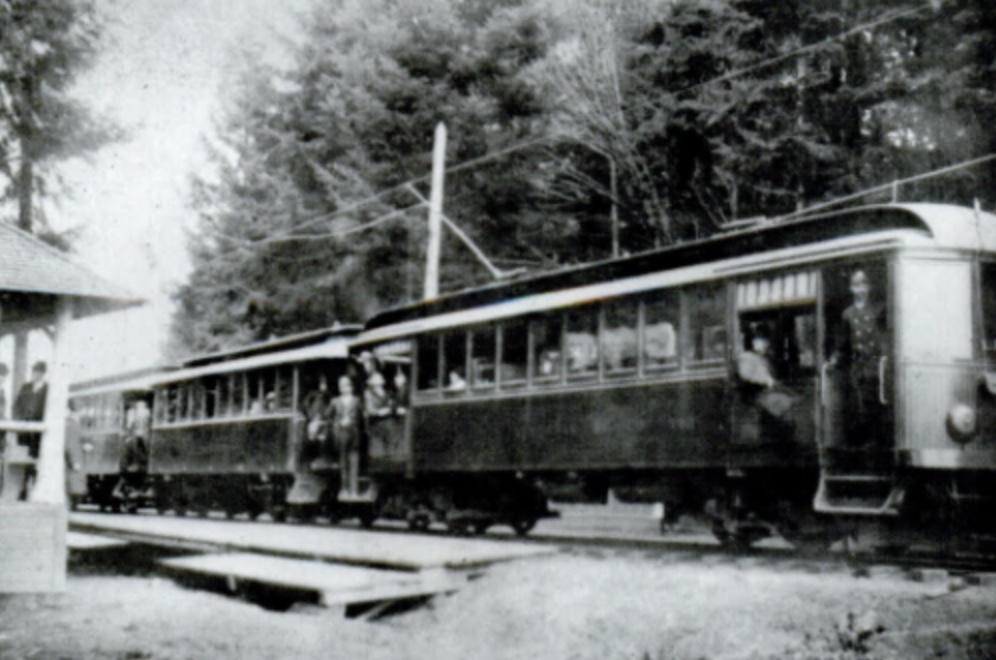 Steam was chosen as the propulsion method, Haneckow explained, because commissioning it was cheaper than an electrified line. The lack of established hamlets and towns on the northern peninsula meant that the St. Johns Motor Line had to provide a cheaper alternative that could be improved later as population and commercial development increased. 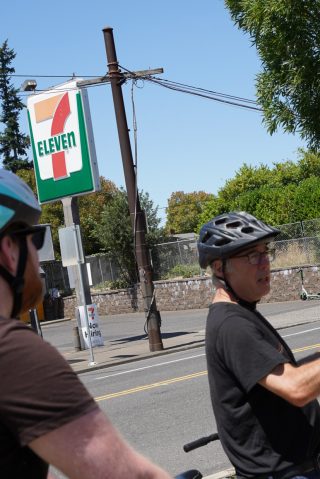 The pole in the background was built for the electric bus line that ran on N Greeley.

At the start of the ride, around two dozen transport history buffs toured Haneckow in the parking lot of McMenamin’s White Eagle Pub on North Albina and Russell, where the Motor Line began. From there we headed east and then north. (The original road used Commercial Avenue, but several blocks are now under Legacy Emanuel Hospital.) From Commercial, the road went west on Killingsworth, then north to Greeley. We saw the train’s lasting influence on urban form at the intersection of Killingsworth and Greeley where the existing commercial building (Mio Sushi) is curved to accommodate the train’s wide turning radius. At that same intersection, Haneckow pointed to a still-operating traffic pole in front of a 7-Eleven (pictured) that was first installed for use by the electric bus line which replaced the steam train.

At stops along the way, Haneckow helped us imagine the Portland that existed a century ago, as an actual version of his popular book “So and Now”. In a Walgreens parking lot in Lombard and Peninsular, we learned that we were in what was once known as Downtown Peninsular, a small hamlet that grew around the train stop. In beautiful Columbia Woodlands, Haneckow shared a photo of the old Portsmouth train station. As we made our way to Fessenden (which today serves the No.4 TriMet bus line and has been a continuous transit route for over 100 years) we pulled to the end of the line. “There was an amusement park in what was known as Cedar Park,” Haneckow explained, pointing a few blocks away.

These little bits were my favorite part of the ride. Like when the owner of a 1901 Victorian on Willamette Blvd came over to tell us that the original owner was a former Portland City Engineer who was responsible for the paving of the street he lived in. Or when Haneckow shared that much of the edge of the Willamette River between Albina and the east-central was once a swamp that was filled with ballast from European tankers that came to Portland to fill up with grain. This ballast included everything from rocks, sawdust and even furniture and other unwanted waste from Europe. Portland’s original free stack! (Seriously, this infill is also why some streets and buildings on the east side settle unevenly.) 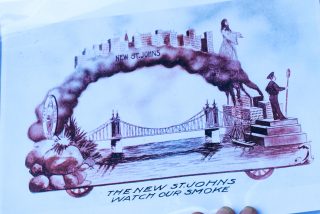 Just as city rail advocates boast today, supporters of the St. Johns Motor Line saw it as more than just a train. The rails carried hopes and dreams of a bigger, bigger city, full of bustling trade nodes and bustling neighborhoods. In fact, as Haneckow explained, city leaders in St. Johns once saw themselves as the rightful center of Portland. At our last stop on the ride, Haneckow shared an illustration of a chariot (right) that raced in a local parade in the early 1900s. It featured a figure of Jesus, the St. Johns Bridge, the smoke from industrial buildings, a Manhattan-like skyline and a swagger-infused slogan that read “The New St. Johns – Watch Our Smoke”.

If you like Portland’s history and want a better understanding of the places you pass through, I highly recommend that you research rides like this.

Tonight (7/12) Granton will be directing his classic Dead Freeways Ride, which will reflect on what Portland would have been like if we had actually built all of the highways once planned. (For more on this journey, read this profile from The Portland Mercury in 2009.)

– Jonathan Maus: (503) 706-8804, @jonathan_maus on Twitter and [email protected]
– Receive our titles in your inbox.
– Support this independent community media with a one-off contribution or a monthly subscription.

Hundreds of people kneel beside the recently ...